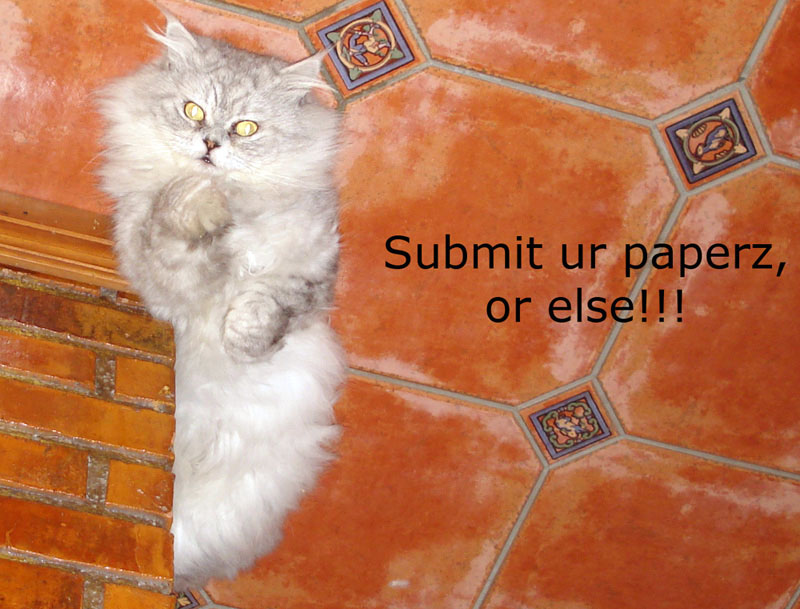 GikII is so cutting edge that it is the nano-blade of workshops, so expect all sorts of challenging papers, tenuous legal connections, l33t powerpoint and keynote skillz, uber-geekery, and a healthy dose of lolcatz. Previous GikIIs explored Facebook privacy settings before privacy had become fashionable; it looked at the legal issues in Harry Potter and the Order of the Phoenix, anime, lolcatz, fandom, virtual property and tattoos.

The call for papers

If you would like to participate, email your abstract of no more than 500 words. This should be sent to either l.edwards@soton.ac.uk or a.guadamuz@ed.ac.uk by July 15 2008. We will confirm acceptances by August 1. Abstracts may be accepted after this date depending on whether the workshop is full. Numbers will be limited so book now!

No n00bs allowed.
Posted by pangloss at 9:54 am No comments:

Email ThisBlogThis!Share to TwitterShare to FacebookShare to Pinterest
Labels: gikiii

The Strange Case of the Moral Panic That Didn't Bark

.. or tae see ourselves as others see us..

Via my colleague Mark Telford, this abstract from Philip Jenkins, a criminologist.

Abstract
A ‘moral panic’ is characterized by such themes as the novelty of a particular menace, its sudden explosive growth, and the menace it poses both to accepted moral standards and to vulnerable groups and individuals. Some problems, however, apparently have all the features that would generate a self-feeding media frenzy, and, yet, they do not do so. I will explain this absence of panic by examining the issue of internet child pornography. The failure to construct the problem in ‘panic’ terms reflects the technological shortcomings of law-enforcement agencies, which force them to interpret available data according to familiar forms of knowledge, rather than comprehending or publicizing new forms of deviant organization. This lack of awareness then conditions the nature of political investigation and media coverage.
http://bjc.oxfordjournals.org/cgi/content/abstract/azn016

Does anyone on this list NOT think there has been a moral panic over child pornography? In the US, the Time cover of 96, the CDA, the COPA, et al.... are we and the criminologists on different planets??
Posted by pangloss at 2:00 pm No comments:

..or beware! that Facebook app you just downloaded might be stealing your data and all of your friends!

Is this really still news? PG has said it at at least a dozen talks by now (most recently to Ofcom and the OxII).. however the BBC has helpfully written an app to prove the point, and it is a nice clip. Here's their clip.
Posted by pangloss at 12:38 am 2 comments:

Pangloss had a highly enjoyable night out last night (indeed she has not totally yet recovered :) to see The Great Lawrence Lessig, who is apparently in Blighty for a few weeks, perform at the IET, giving the annual lecture of the Society for Computers and Law, on "Corruption 2.0". There was a slightly sparser attendance than one might have expected - perhaps because the august members of the SCL weren't too clear what the connection of corruption to cyberlaw, er, was. Neither was Pangloss (though like all true devotees of Larry, she knew of this volte face already because it had been announced on his blog) ; but any opportunity to see Our Greatest Living Forehead perform in his (not patented, but no doubt creative commons licensed) style of matching speech cadences to single word ppts, is too good to miss. Most of London's IT law royalty seem to have agreed, as they were out in force, with everyone to gossip to from Richard Susskind to Chris Reed to blog king Geeklawyer, and Lessig's own anointed heir Jonathan Zittrain (resting for a moment from his own current perpetual whirlwind of booklaunches.)

But enough of the court circular, what of the lecture itself? Well, lo, it turns out that Corruption 2.0 is not that distant a step from Cyberlaw 1.0 after all. Clearly, losing out on the US copyright term extension battle not only to ill informed Congressmen and greenback-handed lobbyists, but also to the presumably (?) better informed and less venal Supreme Court, has irritated Larry more than a little. His thesis is now that whereas Corruption 1.0 - old fashioned bribery - was down to self-interest taking precedence over good policies, Corruption 2.0 is more about ignorance than interest. Today's legislators don't make the right laws, says Lessig, not primarily because of lobbyists and campaign contributions - but because they simply don't understand the technologies well enough to get the law right to govern it. But if there is hope, it must lie, not with the proles as in 1984, but the geeks. Since Corruption 2.0 depends on political ignorance, the answer must be for the geeks - sorry, the digerati? the slashdotii? the technocracy? - to take to the political w0rld.

Now I'm sure this is just the campaigning tip of the iceberg of a much bigger plan, because Pangloss can see a few flaws in this analysis. For a start, in the US election on right now, it is pretty plain that the OTHER great cyberlaw issue of the day (after digital copyright) is indeed likely to be decided by oldfashioned er Patronage 1.0. It doesn't take a political expert to notice that one likely candidate in the election to come is backed financially by the telcos and has no truck with net neutrality - while the other doesn't, and has.

A second problem is that geeks in Pangloss's experience, love yakking about politics but rarely if ever seek office (or even a senior management job.) Nor are they natural baby-kissers and flesh-pressers, especially at the more Aspergers spectrum end of things. Geeks on the whole exercise influence as academics and industry CEOs, rather more than as political animals (in this country, Profs Ross Anderson and Richard Clayton come to mind. ) Perhaps this is really what Lessig actually meant - certainly he was very pleased with the UK Gower Report on IP. which was heavily influenced by academic "friends" and consultees, both before and after the initial consultation was published. The field of law and security - which Lessig also touched on - in the UK, has also recently benefited hugely from academic influence - it is well known the HL Report on Personal Internet Securityof last year owed a great debt to Richard Clayton (but has it actually made it to forming government policy? sadly, not yet). And Richard Susskind's work on courts automation and public sector data reuse has also been, though perhaps less obviously, influential.

At the root of Lessig's fascinating lecture was an unspoken, rather 50s scientificational question - who should rule us, the democratically elected, however foolish or easily lead, or the current meritocratic elite? Of course the situation is never that clear - if the choice is of rule by money, or rule by smarts, Pangloss knows which she takes. Interestingly, Hugh Beale, former English Law Commissioner and now again Prof of Law at Warwick,who gave the Bond Pearce lecture on the Draft European CFR at Southampton I wrote up a week or so back, mentioned in the course of questions, that in his view, an academic article, at just the right time, can make as much policy impact as a Law Commission report. Should we academics stay in our ivory towers and hope for our traditional delivery routes to influence Westminster, or should we storm it ourselves, as advisers if not representatives? So anyway, much food for thought (especially as London votes today on Red Ken vs Boris) and I'm sure the IT law blogosphere is full of consequent buzz today :)-
Posted by pangloss at 11:35 pm 1 comment: