Welcome back to me

Yes, it's been a very long time since I blogged here. I'm not exactly Technollama am I? *hangs head in shame*. I could list the usual litany of less-fun-than-blogging things I've been doing (work for the OECD and WIPO, teaching, moving jobs, being snowed in, ORG, etc etc) but really it seems that blawging is a habit it's easy to lose if you're not careful, but also (I hope) easy to resume. (Also, let's face it, Twitter. Wonderful fun, dangerously seductive and Bad for Blawgs.)

So to kick off, a reprise of my annual not-very-serious predictions for next year, from the SCL journal site (where many more such can be found.)

"1. France will pass a law forbidding French companies from using cloud computing companies based anywhere other than France. Germany will ban cloud computing as unfair competition with German companies. Ireland will consider putting its banking in the cloud, but realise there's no point as they have no money left.

2. A Google off-shore water-cooled server farm will be kidnapped by Somali pirates, towed to international waters, repurposed as encrypted BitTorrent client and take over 95% of the world's traffic in infringing file-sharing (with substantial advertising revenue, of course) (thanks to Chris Millard for this one). (Meanwhile the Irish will attempt to nationalise all the Google servers they still host on shore to pay for bailing out the banks.)

3. TalkTalk will lose their judicial review case against the Digital Economy Act, but the coalition will find some very good reason to delay bringing in the Initial Obligations code, and the technical measures stage will quietly wither on the vine, as rights-holders realise it will cost them more to pay for it than they will gain in royalties.

4. 120% of people of the world including unborn children, all except my mother, will join Facebook. Mark Zuckerberg will buy Ireland and turn it into a Farmville theme park, with extra potatoes.

5. 4chan allied with Anonymous will hack Prince William's e-mail inbox on the eve of the Royal Wedding, revealing he is secretly in love with an older, plainer and less marriageable woman than Kate Middleton (possibly Irish), and also illicitly downloads Lady Gaga songs. In retaliation, the coalition passes emergency legislation imposing life imprisonment as the maximum penalty for DDOS attacks, and repeals the Digital Economy Act."

Lawrence Eastham kindly says that he can see at least 2 of these coming true.I imagine one of those is no 3, but which do you think the other was, dear readers?

As a final amuse-bouche beforeI return to Proper Things, have a picture of someone skiiing to the local shops this morning. yes. Not Seefeld. Sheffield. Merry Xmas! 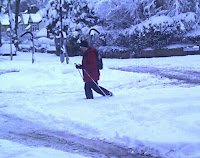