Exciting breaking news from the IPKat that eBay have won their court case in the UK High Court , asserting that they are not liable for the trademark infringements of sellers on their site selling counterfeit goods. There are now three decisions in favour of eBay (UK, France and Belgium), one decision in favour of L'Oreal (Germany) and one decision (from Spain) still outstanding. The case is important to an understanding of how the immunities in Art 14 of the EC E-Commerce Directive operate in relation to "web 2.0" or user generated content sites. The case indicates that on both trade mark law and article 14, the issues will be referred to the ECJ for a clearer ruling.

The judgment is available here. It comes only weeks after a French court reversed a previous French ruling finding for eBay and against L'Oreal. Does this show a turning against the theory that UGC sites are "complicit" with the infringing activities of their users and not deserving of immunity under Art 14, since their revenue is derived in part from such activity and they may have constructive knowledge thereof? Pangloss has not had time to read the ruling properly yet but the relevant conclusions appear to be:

ii) Whether the sale by sellers on the Site of testers and dramming products and of unboxed products amounts to an infringement of the Trade Marks depends upon questions of interpretation of the Trade Marks Directive as to which the law is unclear (see paragraphs 319-326 and 331-342 above). Although these questions are academic so far as the acts committed by the Fourth to Tenth Defendants are concerned, they are potentially relevant to the question of what relief, if any, L'Oréal are entitled to. Accordingly, guidance from the ECJ is required on these points.

iii) eBay Europe are not jointly liable for the infringements committed by the Fourth to Tenth Defendants.

iv) Whether eBay Europe have infringed the Link Marks by use in sponsored links and on the Site in relation to infringing goods again depends upon a number of questions of interpretation of the Trade Marks Directive upon which guidance from the ECJ is required (see paragraphs 388-392, 393-398 and 413-418 above).

v) Whether eBay Europe have a defence under Article 14 of the E-Commerce Directive is another matter upon which guidance from the ECJ is needed (see paragraphs 436-443 above).

vi) As a matter of domestic law the court has power to grant an injunction against eBay Europe by virtue of the infringements committed by the Fourth to Tenth Defendants, but the scope of the relief which Article 11 requires national courts to grant in such circumstances is another matter upon which guidance from the ECJ is required (see paragraphs 455-465 above).

Pangloss Sez: Looking to the mentioned paras 436-443 we find little but the conclusion that the Art 14 defense is not acte claire and that this is born out by the range of decisions in cases across Europe and existing references to the ECJ. There is some interesting discussion of the German Internet Auctions cases however. It looks as if we may have to wait for the ECJ to finally speak for more guidance though .

Interesting little bit of accreting web 2.0 law - the Philadelphia Bar Association, from March 2009, has issued an "ethics" opinion on whether it is legitinate to find out about what potential witnesses say on sites like Facebook by getting "sockpuppets" to Friend them. No, said the distinguished Bar, unsuprisingly - you should Friend them yourself and ask them to speak. Duplicity is not the way to acquire evidence.

Obvious but good to hear it said, in the endlessly scammed world of the anonymous/pseudonymous social networking scene.

Interesting quote at the end of the article:

"Facebook and MySpace profiles are different from public spaces where one can freely film and record others, the opinion says, because an invitation is required to access them, notes a Social Media Today post on the opinion."

Hmm. So Facebook users are a bit like vampires then? That figures.. (I'm sorry, vampire lawyers are on my mind bexause they're what I think of everytime someone mentions Wolfram Alpha, which is about every 10.2 seconds at the moment. is no one else thusly afflicted? Clue: think of Angels.)

As a light relief intro to the Bank Holiday Weekend, which Pangloss is really, really looking forward`to spending in sunny Sunningdale, a cartoon courtesy of Matthias Klang, for all my PhD readers out there :). 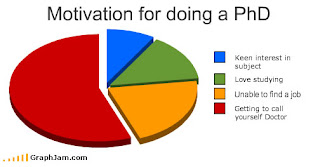 France continues to be an entertaining source of Internet law. The Guardian reports (13 May 2009) that

"The world's largest online auctioneer, eBay, was today claiming a "victory for consumers" after a court in Paris ruled that it was not liable for counterfeit L'Oreal perfumes for sale on its website.

The perfume and cosmetics company has taken legal action against eBay in four other countries, but today's ruling is a major victory in France for eBay, which was fined €38.6million (£34.7million) in a similar case against the luxury goods manufacturer LVMH (Moet Hennessy Louis Vuitton) group and €20,000 against Hermès. The ruling reflects a Belgian court's decision last August, and a ruling is expected shortly on a similar case being brought in the UK.

L'Oreal has claimed that the eBay website profits from the sale of fake products and that brand owners are expected to help police online auctions. The cosmetics company told the hearing in Paris it believed that as many as 60% of the perfumes sold on eBay under its luxury brand names were fakes.

But the court ruled that eBay was meeting its obligations to combat the sale of fake products, and urged the companies to use mediation to develop a plan which would enable them to work together on the issue."

This is fascinating as yet another example of how completely the hosting immunity provisions of Art 14 of the EC E-Commerce Directive are failing to be interepreted in a harmonised manner across Europe. As the Guardian report notes, only a few months ago we saw a completely opposite ruling emerging from the French courts, which are regarded as the toughest courts in Europe on intermediaries "assisting" in IP violation (see eg previous DailyMotion and MySpace cases).

The problem is also not only about IP; in Italy, Google is being sued for allowing the posting of defamatory videos on its site, while in France also, several cases have held user-generated content sites liable for posting of private photos. Only in the UK, of the large commercial EU countries, are we yet to see a case holding a major web 2.0 intermediary liable in respect of user generated content.

The immunity provisions of the ECD in Arts 12-15 desperately need reviewed and reformed, yet the Comnmission shows no signs of wishing to initiate such a process. Pangloss, suprise, suprise, is currently rewriting her chapter on this whole area for Law and the Internet 3rd edn. My provisional conclusions are that a bright line of no liability on intermediaries for content provided by third party content providers, unless or until notice is given to take down (as in Art 14) can no longer be sustained.

We are seeing instead a move towards a new system, by court if not legislative creation, which

If at first you don't succeed? A series of er Classical references.

To which one can only say, three strikes and you're er in?? Well, if you count the European Parliament's explicit refusal to agree to disconnection of filesharers by ISPs or the industry rather than courts six days before this vote, as a "strike"?.

Well, it should make the Eurovision Song Contest on Saturday entertaining!

And what WOULD wily Odysseus have done with Google Street View? An ideal way to spy on the camp of Troy indeed!!
Posted by pangloss at 11:45 pm No comments:

Excellent news at the eleventh hour from today'simportant vote on (yes, that again) the Telecoms Package. From EDRI-gram:

"Today, 6 May 2009, in the second reading of the Telecom Package, the
European Parliament (EP) voted again for the initial amendment 138, with an
overwhelming majority of 407 votes for and just 57 against the proposal.
However, on this same occasion, the EP rejected the amendments that
would make "network neutrality" principles mandatory.

Although initially MEP Catherine Trautmann's report included the original
amendment 138/46 as adopted in the first reading by the European Parliament,
after the opaque negotiations with the EU Council from the past 2 weeks
this amendment had been changed in a weaker version. The initial text
"without a prior ruling of the judicial authorities, notably in accordance
with Article 11 of the Charter of Fundamental Rights" was replaced by "and
the right to a judgement by an independent and impartial tribunal
established by law and acting in respect of due process in accordance with
Article 6 of the ECHR."

Although the new French authority (called Hadopi) that could be established
by the three strikes French draft law can't be considered a "tribunal
established by art 6 of ECHR", the text left room to more fuzzy
interpretations by removing the wording "prior ruling". Thus the compromise
text could be interpreted that such an authority could take a decision of
cutting one's access to Internet, but one would be allowed to go to court to
challenge this decision.

But the EP decided that the initial amendment 138 needed to be supported
once again. The battle was not easy, though. MEP Rebecca Harms insisted in
the plenary for the change in the voting list and for having the original
amendment 138 first . Her position was supported by MEP Alexander Alvaro and
disagreed by the Rapporteur MEP Catherine Trautmann. The Chairwoman Diana
Wallis agreed to go on first with the vote on the Amendment 138. 407 votes
from MEPs supported the amendment, thus saying NO to 3 strikes in Europe.
Again.

....
But besides the amendment that re-instated article 138, all the other
citizen rights amendments were rejected by the plenary of the EP. Thus, the
Harbour report was adopted and the Trautmann report was rejected.

The discussions with the Council will continue and should lead to a third
reading at least for the Trautmann Report. But at the same time, there are
little chances for something to be changed in relation with the articles on
"network neutrality", that would become part of the directive."

It's good to see that all the hard work Simon Bradshaw put into our ORG memorandum on Amendment 139 may not yet have been a waste...

So what happens next? Well, either the Council of Ministers can cede Am 138 in the interests of getting the damn thing through before the next EU presidency; or they can stand fast and push the whole package to Conciliation. reportedly Commissioner Viviane Reding is pushing for the former option as she wants the package done and dusted before her term expires. It's basically down to ministerial poker now :)
Posted by pangloss at 1:10 am No comments:

SCL has announced a bunch of new lctures including one by "Professor Jonathan Zittrain, the Susan Byrne of Internet thinking."

I guess they didn't expct him to be back in the UK any time soon??