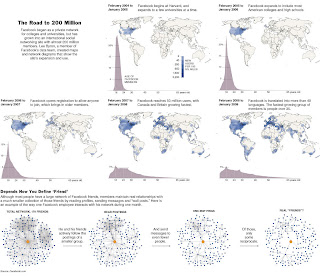 Interesting graphics from the New York Times on the rise and rise of Facebook: which has doubled its global membership from 100 to 200 million in eight months - quite remarkable.

Some interesting comments on FB's recent concessions towards user pressure to roll back some of FB's changes of terms and conditions, and unpopular redesign of the web interface.

" “It’s not a democracy,” Mr. Cox says of his company’s relationship with users. “We are here to build an Internet medium for communicating and we think we have enough perspective to do that and be caretakers of that vision.” "

Most interestingly (in an article which is at points inches away from a puff post) are FB's attempts to present itself not as a provider of intrusive advertising in a private space but as a promoter of a new style of "interactive advertising" which will maintain momentum even as advertising revenues dry up forother providers dependent on ad revenue such as free webmail services.

"Facebook’s approach is to invite advertisers to join in the conversation. New “engagement” ads ask users to become fans of products and companies — sometimes with the promise of discounts. If a person gives in, that commercial allegiance is then broadcast to all of the person’s friends on the site.

A new kind of engagement ad, now being tested, will invite people to vote — “what’s your favorite color M&M?” for example — and brands will pay every time a Facebook member participates.

“We are trying to provide the antidote for the consumer rebellion against interruptive advertising,” says Sheryl Sandberg, Facebook’s chief operating officer and Mr. Zuckerberg’s business consigliere."

..Facebook recently introduced advertising tools to let companies focus on users based on the language they use on the site and their geographic location. So, for example, an advertiser can now tailor a message to the Latino community in Los Angeles or French speakers in Montreal." "

Pangloss sez: sounds like an attempt to repackage the much disliked Facebook Beacon, and step away from the bad press around Phorm in particular and targeted advertising in general. But is it more than puff? Even if users get to vote on their favourite M and M flavour, they will still not get to vote on the conditions under which FB pass on their personal data to third party marketers, despite the ra ra of consultation on the FB principles (see previous post).

Notably FB say they will never charge users for part or all of the FB services despite the credit crunch . However they do not say they will never pass on non-anonymised personal data to third parties, something which is currently barred by their own terms but could change in future (and is not barred by proposed FB Principle 3 either).

On the other hand the idea that users might actually be paid for giving their public allegiance to a product is interesting. Only the other week Pangloss vigorously denied the market would ever support paying for personal data (other than in costs-nothing considerations like air miles and loyalty card points) when it already routinely collects it for free. Maybe this is the first glint of a market sea change?

Given the retention of deactivated accounts does 200 million number the active members or those that have ever signed up? (in which case I'd account for about 3 members!)

Anonymous said...
This comment has been removed by a blog administrator.
9:52 pm