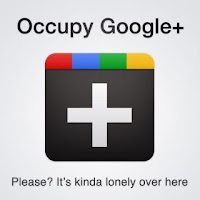 Email ThisBlogThis!Share to TwitterShare to FacebookShare to Pinterest
Labels: google plus

I think it is worth putting a note in your diary for a year or two's time so you know when to come back an laugh at this article. It completely misunderstands the products.

Many people have signed up to G+ and not really used it but this is inevitable. Google cannot launch a new product without everyone rushing to sign up. However, unlike Buzz and Wave, G+ has attracted a solid body of users who have kept using it and this are the core userbase that G+ will grow out of. A userbase who will put with Google's crap (e.g. name policy) in the same way that early Twitter users put up with downtime.

@tregenza G+ may survive as a niche product but I agree with the article that as a rival to FB it has failed and the piece gives some good reasons why that be. I'm a bit tired of the general polarisation on this, just as I am with there-is-no-go-but-applePR : G + clearly hits some buttons with certain tribes eg privacy advocates, but it is a tough job to overhaul the market leader in a field dominated not by quality but by network effect. Google were the one outfit that could have transferred overa netwk effect to match FB but it hasn't hapened in terms of activiy as opposed to initial placeholderism and I think that was indeed a onetime window of opportunity.